Auburn’s founder, Judge John Jackson Harper, settled here in 1836 with his family of eight sons and three daughters. Several other families who were friends and relatives of Judge Harper brought the total number to 34 settlers. They were all Methodists and were persuaded to settle here by the Reverend Morgan Turrentine, a circuit-riding preacher, who became their first minister when the Auburn Methodist Church was officially organized the following year, 1837.

From the beginning of Auburn’s history, the growth of this great church has paralleled that of the town. The first building was a log structure which stood on the site of the present playground. It also served as Auburn’s first school building. The earliest listing of members of the church covers the years from 1850 to 1853. There were 324 names listed but 95 of them had been removed or died. A few of them had even been expelled for causes such as drinking or profanity. 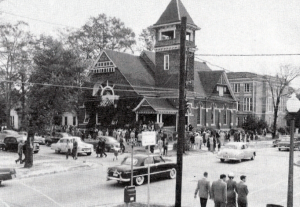 Going to church in the fall of 1954.  The building facing Gay St. on the right side of the picture was the Hamill Memorial Building.

The most significant event in Auburn’s history, and one that had a tremendous impact on this church, was the opening in 1856 of East Alabama Male College, a Methodist institution. It was closed a few years later when the War Between the States began, and most of the students enlisted in the Confederate Army. Following the war, the college’s finances were so depleted that the Board of Trustees and the Alabama Methodist Conference voted to give the college to the State of Alabama. It was reorganized as a Land-Grant college and named Agricultural and Mechanical College. This institution developed into Auburn University. 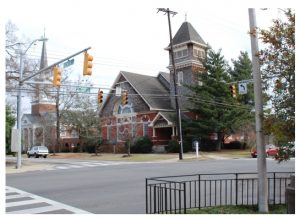 Since that time the college and town have grown and prospered side-by-side, and this church has always been a vital part of that partnership, reflecting similar growth.

A white frame church was built in 1850 on the site of the present Founder’s Chapel. In 1899 the building underwent extensive remodeling and it was encased in brick, at a total cost of $4,000 for the additions and remodeling. The beautiful pipe organ, which was built by Henry Pilcher’s Sons, was installed at that time. This building served as the Auburn Methodist Church until 1955 when the present sanctuary was completed at a cost of $383,500. Dr. Joel McDavid was our minister from 1950 to 1958 and during that time attendance soared, membership increased significantly, and commitment and participation were on the rise. 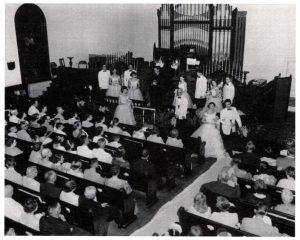 Wedding on June 3, 1955.  The choir sat in the area to the left of the organ.  Note the steps on left leading to the chancel area.  There were two side aisles.  The long center pews were divided down the middle.

The library, former office complex, the educational wing, and the arcade connecting the buildings facing East Magnolia were completed between 1971 and 1975 under the leadership of Reverend Charles Britt. In recognition of the many contributions of Charles and Blanch Britt to the Auburn United Methodist Church, The Children’s Educational Wing was named in their honor.

From 1990-2016, when our church was blessed by the appointment of Dr. George Mathison as our Senior Minister, we have seen phenomenal growth in membership, stewardship, attendance at worship services, Sunday School classes, Youth Ministries, Children’s Ministry, Music Ministry, and an ever-expanding program of Bible Studies, Prayer Emphasis, Missions, and many local outreach programs. Dr. Mathison retired in June of 2016. In July of 2016, Dr. Cory Smith was appointed by Bishop Leeland to serve as our Senior Minister.

In 1992 a major building and restoration project was undertaken. Founder’s Chapel was not only restored but made even more beautiful than it had been originally under the talented planning and supervision of Marilyn Thomas and Monteigne Mathison. It serves well for our 9:30 traditional worship service each Sunday morning and the evening service for college students. It is a favorite place for weddings, funerals, devotional programs, and hymn singings.

With the purchase of a vacated grocery store building adjacent to our property, it was possible to build Epworth Center, an urgently needed facility. It provides office space for a portion of the staff (other staff are housed in the Mathison Education Building), fellowship halls and meeting rooms, a well-equipped kitchen, space for Sunday School rooms, and a Youth Center which is a rollicking meeting place for the more than 200 youth who participate in the program offered for them. In addition to fellowship suppers, games, and many fun activities they also use their space for devotionals, prayer vigils, Bible study, and preparation for their work on many varied mission projects.

A very fine 47-rank Holtkamp Organ was installed in the sanctuary in 1996 after extensive renovations to the chancel area were completed. In addition to enlarging the pipe chambers and building the necessary structures to accommodate the exposed pipes, the choir loft was enlarged, a permanent place for the grand piano was provided, and space for equipment necessary for the music used in the contemporary service were all included in these renovations. 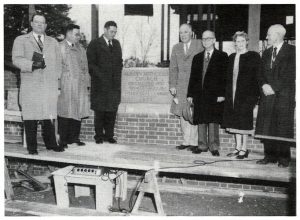 Laying the cornerstone of the sanctuary building.  January 23, 1955.

In 1997 we had the largest increase in membership (123) of any church in the Alabama-West Florida Conference. Because of this growth, which is certainly a wonderful problem to have, we now have four worship services each Sunday morning – traditional services at 8:00 and 11:00 in the sanctuary, another traditional service at 9:30 in Founders’ Chapel, and a Celebration Service at 9:30 in the sanctuary. In order to accommodate the growing numbers of people attending Sunday School, we now offer additional classes at 9:30 and 11:00. Many young families and students are attending the Contemporary Service at 9:30 and then Sunday School afterward. 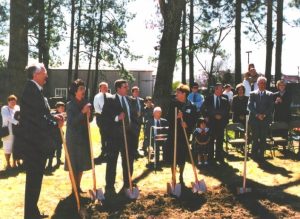 A Long-Range Planning Committee worked on solutions to our space problems and made recommendations in that regard. The two houses and the little cottage which formerly stood on the lot just north of the Epworth Center were razed. A new facility, The Mathison Education Building, which connects the Epworth Center with our sanctuary, was completed in 2000 and dedicated to George and Monteigne Mathison.

In October 2007, we purchased St. Michael’s Catholic Church. St. Michael’s rectory and chapel were also included in the purchase. AUMC has taken possession of the buildings in January 2010. These facilities serve as Adult Sunday School space, Food Pantry, Children’s, Youth & College activities, and a number of other ministries for all ages.

It is exciting to reflect on almost 180 years of growth from a small log church with about 30 members to a magnificent sanctuary and educational facilities with a growing membership of over 4,500 and many programs of service to the community as well as missions around the world. It is even more exciting to anticipate the great things that this church is capable of achieving under the inspired leadership of our staff.